The Gift of Past Lives with Mother, Isabella, God & Elizabeth 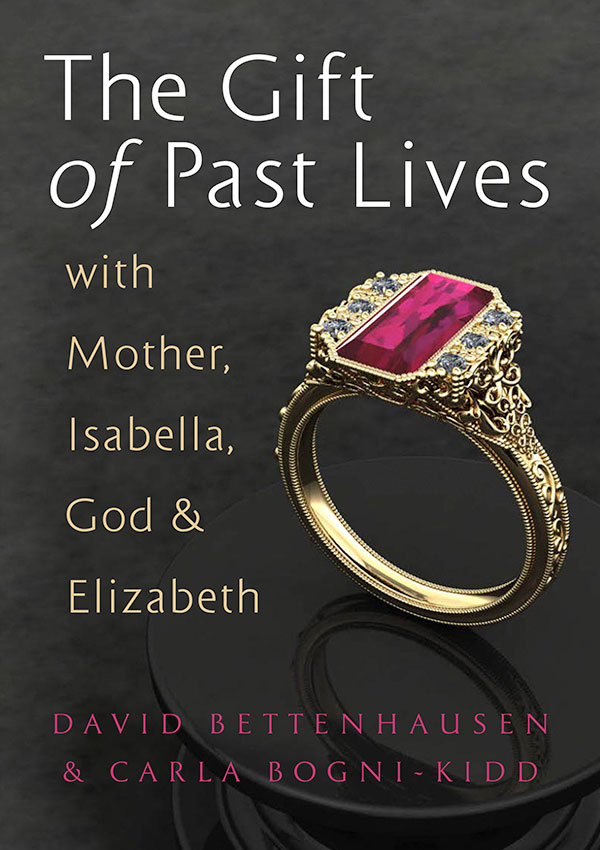 FROM CHAPTER 1
It all started with a simple question. Would you like to try meditation?

FROM CHAPTER 9
One day during meditation, Isabella, Dave’s spirit guide, gave us Five Simple Rules to follow and live by. They correspond with the biblical Ten Commandments and actually are easier to remember. Three of the five behaviors you should live without while two are actions you should carry in your heart and soul forever.

We should:
Live without conceit.
Not harbor jealousy.
Be without selfishness.
Let love fill our heart and soul.
Forgive always.

Each choice or action in life needs to begin with asking yourself, “Am I trying my best to not be conceited, jealous, or selfish? And do I choose to forgive others their trespasses and love them despite them?

FROM CHAPTER 2
Dave speaking
The sand was warm in between my toes. In the distance, I could see the curved lines of the roller coaster turning around and in on itself. Next to it was a large wheel with blue, yellow and green bucket seats. I now understand it was a Ferris wheel. Small heads and feet hung from the baskets. It turned in the distance. The beach bustled with families.

I had never seen a beach. I had to run! I had to scream!

Suddenly, behind me I heard a girl’s voice yelling. “Stop running! You are bothering my family.” I turned to see a little girl standing in a two-piece blue bathing suit. Her face was slightly rounded, her eyes were warm, and they were almost laughing and squinting. She stood with both hands on her hips. Her belly was rounded above the ruffled bathing suit bottom.

Suddenly, I felt a shove on each shoulder. I fell back into the sand. The little girl had pushed me down and was sitting on my chest.

Behind her, a man, woman and four other little girls of various sizes were seated on a blanket. “Carla!” The woman yelled. “I don’t know what came over her.” Carla bent over and planted a kiss on my forehead. Then, she jumped up, laughing. The woman said, “Carla, apologize! That is not how a lady behaves.”

Carla speaking
During the summer of 1962, my parents had tried to reconcile, though they had been separated since I was eighteen months old.

We arrived at Revere Beach with everything we needed except a bathing suit for me.

I can’t recall why I had no bathing suit. Normally, I would have inherited one from an older sister. So, we walked across the road, all seven of us to a souvenir shop where my parents purchased my first brand-new bathing suit, a blue two-piece with ruffles.

I stomped over to the obnoxious little boy, shoved him into the sand and sat on his chest. Then, I planted a kiss on his forehead. I allowed a mischievous smile to spread across my lips.

This has always been one of my most vivid memories. I still cry every time I re-read this section. That summer day in 1962, my family was together. I got a new swimsuit. I never thought that day would mean so much to me later in my life.

Interesting, the things we remember. How did a girl born in Boston and a boy born in Nebraska meet in Boston in 1962 and then again in Ohio thirty-five years later? Is it all by chance?

FROM CHAPTER 10
The next day, Oct. 31, 2014 was a day we won’t forget. From this moment on, our lives here would never be the same. During Dave’s sleep the night before, Isabella, his spirit guide, narrated a story while Sheila, Dave’s past-life guide, transported him to a past life in the 1920’s. Since receiving this story, we have researched the events and corroborated them through other sources. We have not changed the names here.

In Dave’s past life, Brenda and I were flappers in a speakeasy in Chicago. The scene opens in an alley. It is raining and he spots me, standing in the dark, deserted alley. Dave wears a black suit, white shirt and a pencil tie. I’ve fled the bar where my gangster boyfriend has become enraged that I was having “too much conversation” and ordered his thugs to drag us out to the alley. I stand and watch in horror as they shoot Dave through the heart and kill him.

FROM CHAPTER 18
Hours later, when he came to the office that day, Dave was visibly disturbed, obviously preoccupied. We went into the break room, or as it was now, our meditation room. I sat in my usual chair, the meditation music playing. But Dave did not sit down in his usual chair. Nervously, he said, “I have details from the night before. Isabella told me the rest of J.J.’s and Ruby the flapper’s story.

As he told the story, I was finishing his sentences. I was seeing and remembering it just as he was becoming J.J. and telling me the story.

How was this possible? How could Dave and I both at the same time recall a life that happened in 1925 before we had even been born in this life?

FROM CHAPTER 19
At the reception, when J.J. asked Ruby to dance, she figured him to be one of Genna’s henchmen, in which case, she’d have no say as whether to dance. But he seemed persistent … and sincere.

As J.J. pulled her toward him, he noticed the red, ruby ring, which appeared more vivid next to her ivory skin. He gazed at her magenta dress to her delicate ankles, up to her steel, blue eyes. “You have the voice of an angel,” he said.

The next Friday night, Ruby was singing at D’Andre’s speakeasy wearing a red, silk blouse and white, fringed skirt, her hair slicked back and held in place by a sparkling, silver band. She had painted her lips and fingernails ruby red. She wore the ring. It is who I am, she thought.

FROM CHAPTER 19
During our trip to Chicago, October 2016, Dave and I decided to visit Little Italy in the hopes of finding Ruby the flapper’s still-standing, 1925-apartment building.

We walked around the area, up and down the streets waiting for Dave (then J.J.) to remember something familiar. Isabella, his spirit guide, would chime in, “You’re getting warmer.”

While walking back toward the restaurant where we had dinner reservations, I looked across the street at an apartment building, startled. Pointing to a yellow, brick three-story building, I said to Dave, “Look!”

The name above the door read, “Isabelle Apartments.” Of course, Isabella confirmed it to be Ruby’s former place of residence. Isabella confirmed the building had always had that name. “How else would you have found it?” she said.

FROM CHAPTER 22
So, have you asked yourself why Carla and I have been brought back together twenty-nine times either as mother-son, siblings, friends, or spouses? We asked ourselves the same question over and over. Is it any wonder that Carla and I met on a beach in Boston at the ages of three and four and then again thirty-five years later?

FROM CHAPTER 22
In karma, we may become who we hate. We pay for our past mistakes in another life. Isn’t this an eye for an eye? We own and then are owned, maybe not the next life but in some other life.

FROM THE APPENDIX 1
Throughout time, God has spoken through mystics: The Adams and Eves, the Abrahams and Moseses, the Enochs, Jesus and Muhammed. The Ruths, Marys, Hagars and Fatimahs just to name a few. Why do we think these are the only ones? Why would God stop at the New Testament or the Quran? When Christians say the Holy Spirit is working through them, what do they mean? Is God truly reaching us?

Praise for
The Gift of Past Lives with Mother, Isabella, God & Elizabeth

A wealth of knowledge

“What an excellent source of information, if you have ever pondered the question, what is the purpose of life? Reincarnation is confirmed, as well as explained. I could not put this book down! You will find a wealth of knowledge and information in these pages. I highly recommend it for everyone.”
— Paula from Boston